Assessment of the Challenges and Opportunities of Urban Stormwater Managing Initiatives

Assessment of the Challenges and Opportunities of Urban Stormwater Managing Initiatives:

Climate change and urban development have overwhelmed the original urban water system in many places. The resulting series of runoff pollution, flooding, urban waterlogging and other problems threaten the health of the city and people's lives. In order to improve urban resilience, restore ecology, and promote livability, cities have embraced the concept of low impact design (LID) and are merging traditional and environmentally beneficial approaches to minimize these impacts. In this study, the rainwater management approaches developed by the city of Vancouver in Canada and Wuhan in China, was compared.

The strength and weaknesses of the strategies of the two cities were reviewed and compared using available literature, reports and government plans. The technological approaches for rainwater management were found to be similar except for the additional problem of river flooding that is an additional constraint in Wuhan. The main differences between the two approaches were found to be in government policies, financial support and the decision-making process. Wuhan’s approach is more ambitious, focuses on a top-down approach and has more financial support, while Vancouver’s approach is taking much longer to develop because of extensive community consultation and phased financial support. Both approaches have advantages and disadvantages but have the same ultimate aims. Furthermore, several recommendations are provided to the city's policymakers. 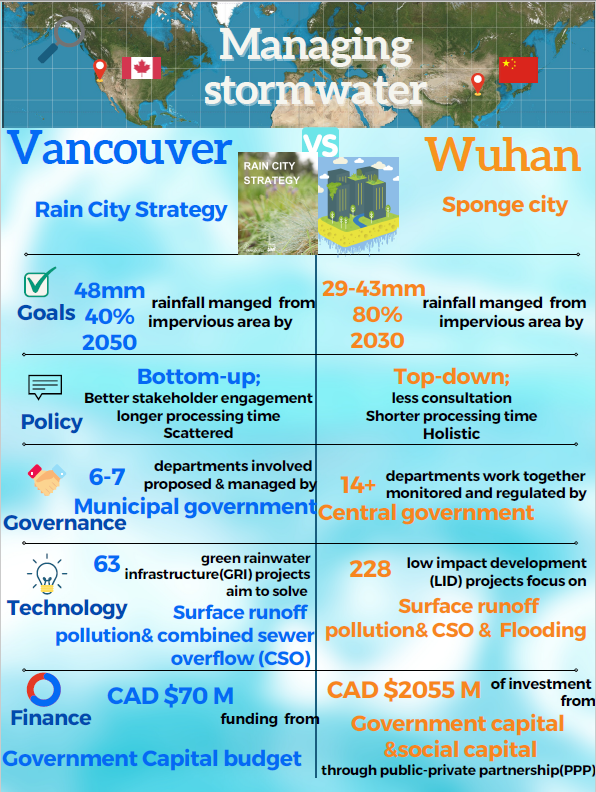